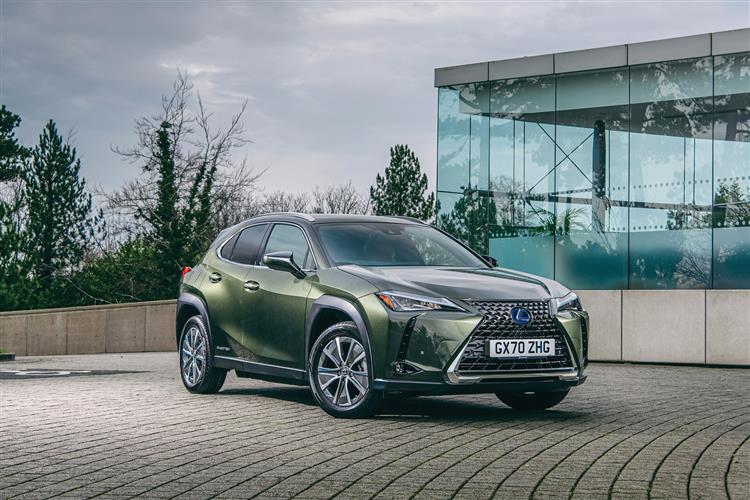 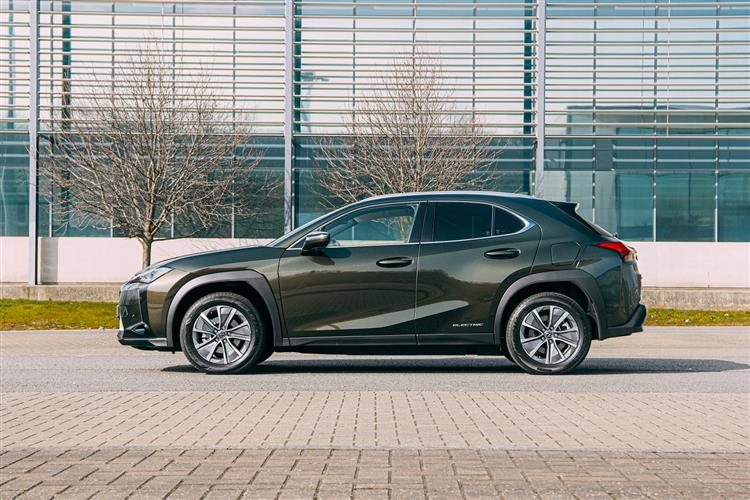 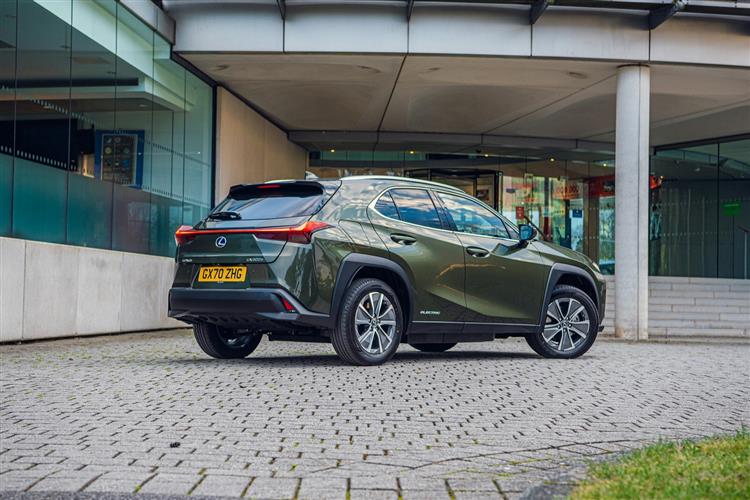 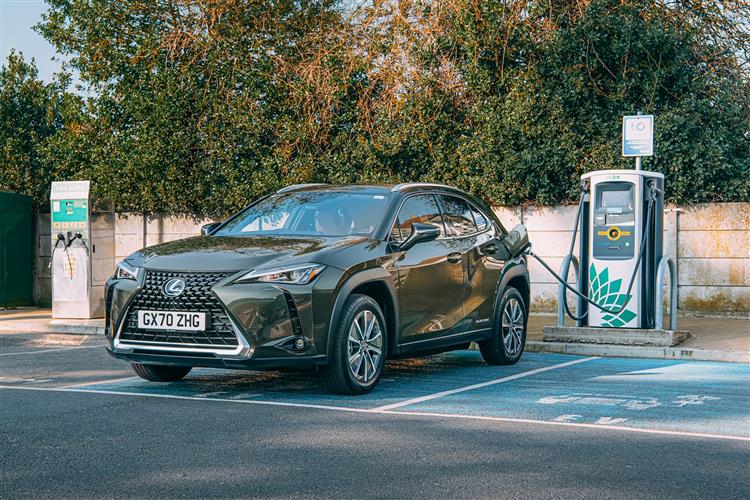 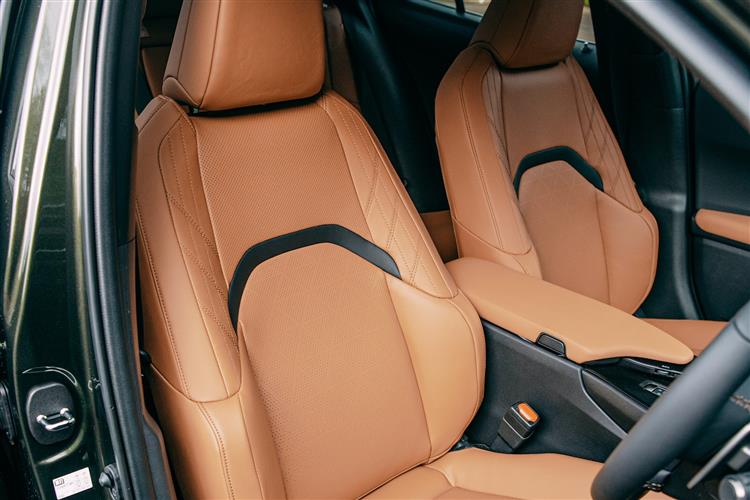 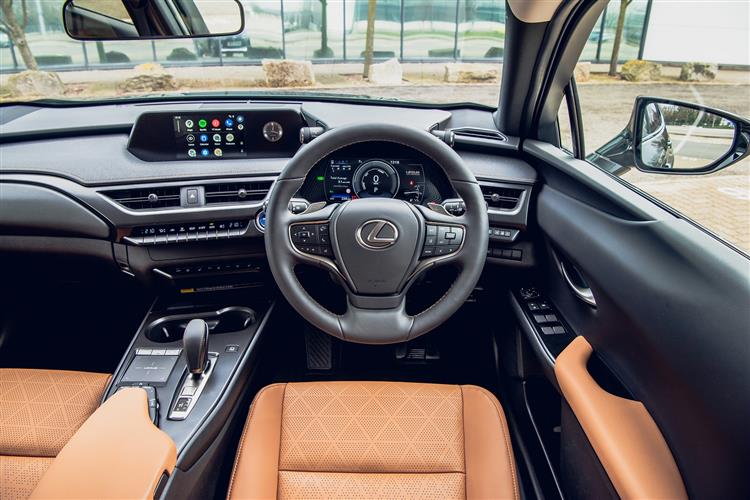 Lexus has been a pioneer in vehicle electrification since introducing the RX 400h in 2005, but this UX 300e model is the brand's very first battery-electric vehicle. It's based on a full-electric version of the Toyota C-HR which currently is only offered in China and is the first of a number of production vehicles the brand will make under its 'Lexus Electrified' banner. The marque is certainly well placed in create an EV having built over 1.6 million electrified self-charging hybrids in the last fifteen years. That means breakthrough Lexus technologies like the power control unit, the battery management system and the electric motor have been tried and tested over many millions of miles.

Lexus wants the UX 300e to be seen as one of the sportier full-battery-powered compact SUVs in its segment. That's an approach made possible by this UX model line's adoption of a Toyota GA-C platform that's much stiffer than the underpinnings used for the Lexus marque's very first compact model, the CT 200h. To balance the EV powertrain, extra bracing has been added and shock absorber damping has been optimised to better match the specific dynamics and extra weight of a full-electric vehicle. This vehicle's low centre of gravity also helps with its dynamic performance, thanks to the way that both the motor and the battery are located beneath the vehicle body, ensuring for optimum front-to-rear weight distribution. The 54.3kWh lithium-ion battery generates plenty of power - 204hp, with 300Nm of almost instantly available torque which spears you away from rest like a hot hatch. 62mph from rest occupies 7.5s but top speed is limited to 100mph and the WLTP-rated driving range is an unremarkable 186 miles. All Evs are quiet of course, but in quite a few of them, engine noise is often substituted for what seems like more audible levels of wind and tyre roar. So in developing this car, Lexus has added extra insulation aimed at suppressing external noises like wind or gravel.

Lexus is one of those brands who believe that buyers of full-EV models want their cars to look as 'normal' as possible. So the visual changes that differentiate this UX 300e model from its ordinary UX 250h self-charging hybrid showroom stablemate are minimal. There's a subtly revised version of this model's 'signature' radiator grille, special 17-inch 'aero-ventilating' alloy wheels, different badgework and a sleeker front bumper with smaller air intakes. Otherwise, it's the usual UX design recipe, with flared front and rear wings and a shape that's one of the smaller ones in the premium-badged SUV 'C'-segment, 4,495mm long, 1,520mm high and 1,840mm wide. Inside, specific UX 300e features are even harder to spot, limited to a bespoke auto gear selector and some EV-specific displays for this crossover's digital instrument binnacle and its centre-stack infotainment screen. As with an UX, the interior feels really high end, with design based around the Japanese architectural concept of 'engawa' where the inside and the outside of a structure are seamlessly connected. Build quality from the Kyushu Japanese plant is faultless and top models get leather seats that feature the traditional oriental quilting technique of 'sahiko'. Despite the compact exterior dimensions, the generous 2,640mm-long wheelbase means the cabin actually feels quite spacious, with 870mm between front and back seat passengers, so there's reasonable rear legroom. And a proper boot too, which impressively, is actually a little bigger than it is in the UX 250h hybrid, capacity having grown from 320 to 367-litres - or 486-litres if you load to the roof.

The quoted WLTP driving range here is 186 miles, which is slightly less than we would have expected from a 54.3kWh battery but much the same as a similar package of lithium-ion cells give you in a rival Peugeot e-2008. Both these cars are easily bettered in terms of driving range by popular compact segment EV class choices like the BMW i3, the Hyundai Kona Electric and the Renault ZOE. Bear in mind that as with all EVs, the quoted range figure will drop considerably in winter weather or over long motorway journeys. You can maximise the range available to you by proactive use of the 'Drive Mode Select' function which allows you to manage smooth acceleration and deceleration, the latter variable by use of steering wheel paddleshifters you can use to scroll through four levels of deceleration regeneration. The charging time using an AC (200V/30A) 7kW garage wallbox is 8 hours. At a DC public rapid charging point, it's possible to recharge from 0-80% in 52 minutes. By using the provided LexusLink app, UX 300e users can not only check battery charge and driving range but set charging schedules according to when the vehicle is next expected to be driven or to when energy prices are low, The app also allows the owner to remotely control the climate of the car.

The CT 200h probably ought to have offered the platform for the Lexus brand's first full-electric model, which would have given the company quite a segment lead in the full-electric sector for premium compact EV models. Instead, that advantage was surrendered to the BMW i3 and it's taken until the 21st century's third decade for Lexus to bring a full-battery-powered model to market. Quite a delay, given that through its parent company Toyota, Lexus has had all the tools for this technology available to it since the turn of the century. Was the wait worth it? Well, we'd hoped for a significantly higher all-electric driving range than this UX 300e can offer. But in other respects, there's a lot to like here. Boot space is less compromised than with some other EVs of this size, there's a beautifully crafted interior and refinement promises to be exceptional. It's all very Lexus. Which means that if you like this brand and want a compact EV crossover, you'll probably like this car very much.