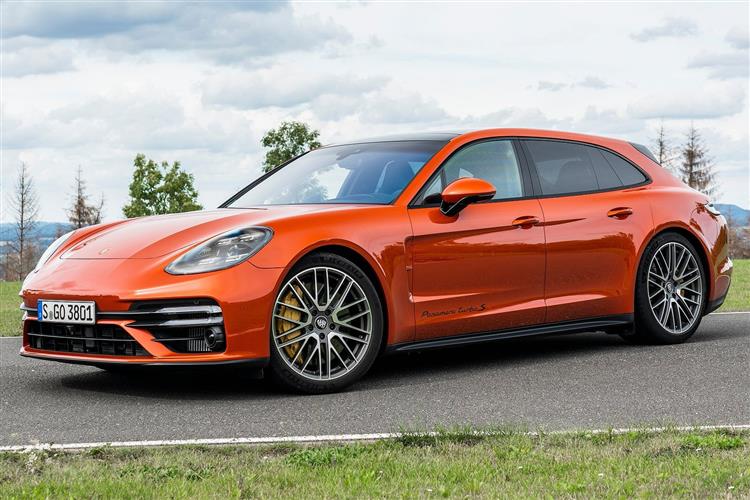 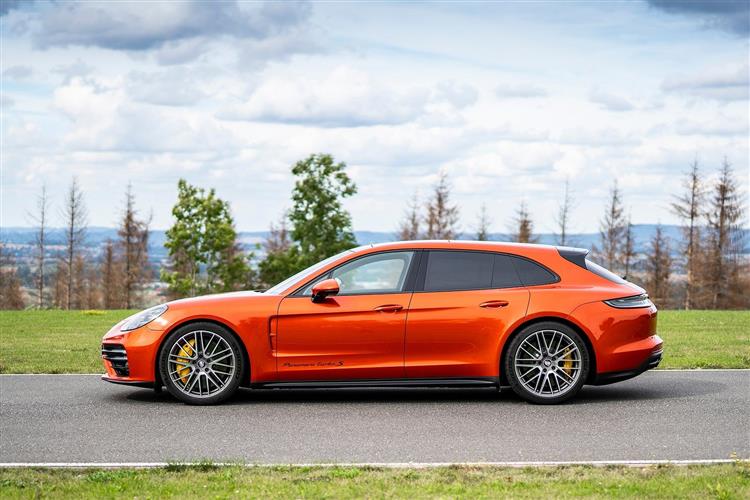 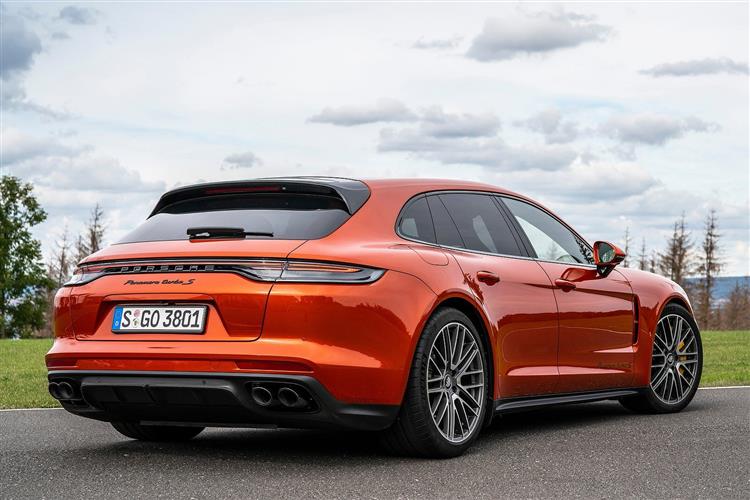 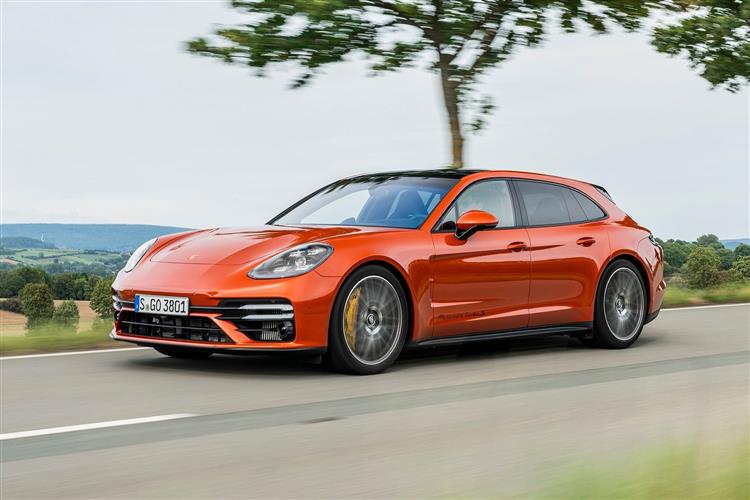 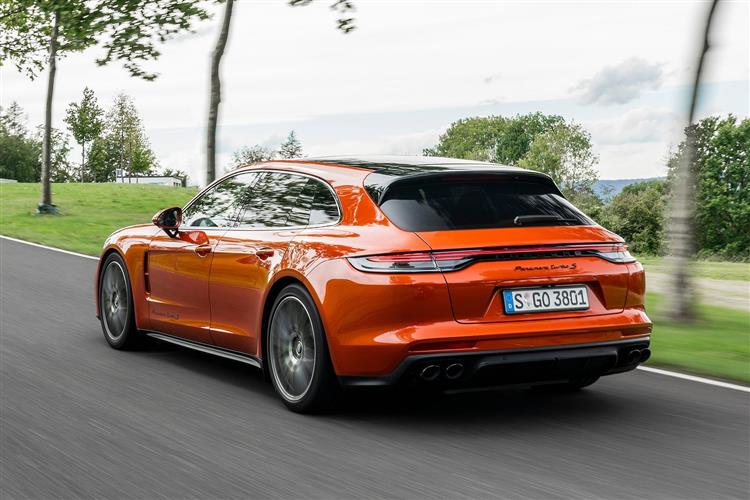 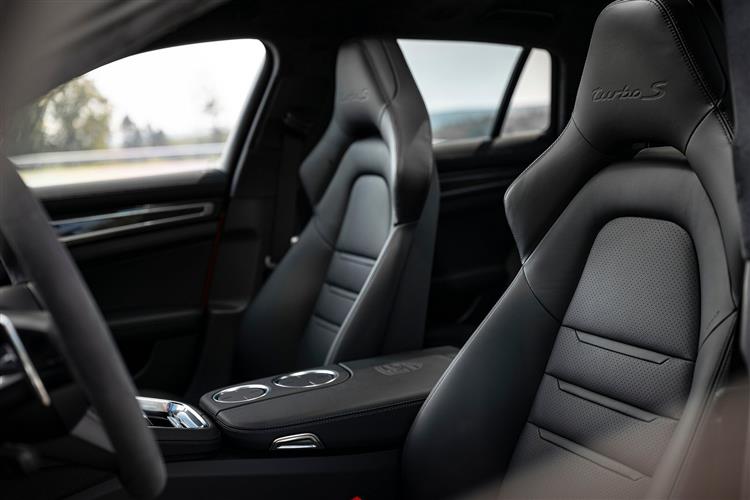 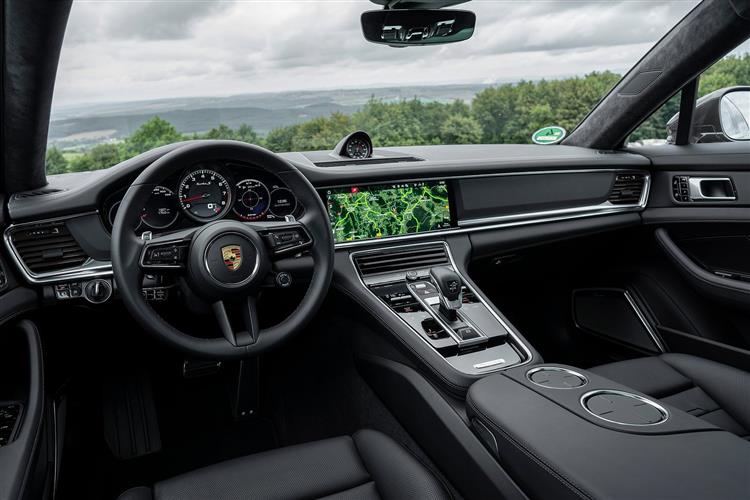 The idea of a Porsche Panamera estate may take a bit of getting used to but in the metal, this Sport Turismo model is remarkably appealing - and usefully practical too. Jonathan Crouch reports on the improved version.

The Panamera Sport Turismo is 4950mm long, 1990mm wide and 1401mm high, so it's 20mm shorter, 60mm wider and 19mm lower than the five-door Panamera hatch. In other words, it's usefully larger, so, in theory at least, should be usefully more practical. As well as extra space in the luggage compartment, the Sport Turismo offers extra space on the back seat. In place of the two individual sports chairs you get in a Panamera hatch, there's a '2+1' bench seat that provides a narrow perch for an extra third occupant - which will be a welcome addition for wealthy family buyers with more than two children. This was the first time ever that any non-SUV Porsche model has offered more than four seats. This car was launched in 2018, but it's the updated version, launched in 2020, that we look at here.

Really clever engineering can defy the laws of physics. If you want proof, here it is in the metal. Thanks to fantastic steering and an astonishing lack of body roll on fast, flowing roads, this two-tonne, five-seat Luxury estate segment contender feels almost as agile as a Porsche 911. Or at least it does when specified with all of the brand's expensive dynamic drive technology. There's a lot of it - adaptive anti-roll bars, 'PTV' torque vectoring and a rear-axle steering system are amongst the highlights. 'PASM' adaptive damping is standard, but most Panamera customers embellish it with the optional air suspension set-up. You're going to want to know about the changes made to this revised model, as before only offered with AWD. Well, the previous top 'Turbo' model has been replaced by an even faster one, the 'Turbo S', which gets a re-tuned version of the car's 4.0-litre twin turbo V8 producing 630PS and capable of the 62mph sprint in just 3.1s. There's a new electrified PHEV variant too, the Panamera 4S E-Hybrid, which mates a 2.9-litre twin turbocharged V6 with a 136PS electric motor creating a combined system output of 560PS - enough to get you to 62mph in just 3.7s. Yet thanks to a larger 17.9kWh lithium-ion battery, this plug-in hybrid Porsche can now manage 33.5 miles of all-electric driving. If you can't quite stretch to that, there's a lesser Panamera 4 E-Hybrid variant available with a similar but slightly de-tuned version of the same powertrain and a system output of 462PS. Or if you want more, there's the V8 Turbo S E-Hybrid, with 700PS. Otherwise, the range is familiar from before; no diesels of course. And a starting point of a 2.9-litre V6 developing 330PS in the Panamera 4 variant - and 440PS in the Panamera 4S. Bridging the gap to that top Turbo S variant is the V8 GTS variant, which offers 480PS.

Wealthy families can also now consider a Panamera, courtesy of the way that this 'Sport Turismo' shooting brake estate model incorporates a small '2+1' centre rear seat that could be used for a child. Mind you, this middle seat is very thin and that, along with the wide transmission tunnel and limited head room means that even older youngsters may object to the thought of travelling in that pew over any distance. This station wagon's 515-litre boot is 20-litres bigger than that of the standard hatch variant and can be converted into a 1,384-litre total loading area. That'll fall of course if you go for the PHEV variants. Enough with the practicalities; what about the aesthetics? Well, this Panamera estate gets a longer, straighter and higher roofline than its hatch stablemate, along with slightly larger rear passenger door and boot openings. The car's wheelbase and rear overhang measurements are the same as the standard-wheelbase Panamera's. What about the changes made to this revised model? Well, the previously optional 'Sport Design' front end is now standard, which features larger air intakes, a different grille and a single-bar front light module. Smarter LED tail lights feature at the rear, with darkened lenses on the GTS variant. Inside, the changes made to this revised model are far less evident but Porsche says it's made a lot of improvements to the car's infotainment system, accessible via a 12.3-inch colour touchscreen in the centre of the dash. They've enhanced the voice control, added in wireless 'Apple CarPlay' smartphone-mirroring and incorporated live road sign and hazard information. As before, there's also a pair of configurable 7.0-inch screens in the instrument binnacle, though we'd still prefer a full screen set-up like Audi's 'Virtual Cockpit'.

If you want to progress from the standard hatch Panamera to this 'Sport Turismo' variant, the extra cost is only around £2,000 to £3,000. All models come fitted with the brand's freshly developed 8-speed PDK auto gearbox. Prices sit in the £75,000 to £120,000 bracket. Rivals are few. Possibly the Mercedes-AMG E 63 4MATIC, the Audi A7 Sportback and the BMW 6 Series Gran Turismo xDrive: that's about it. It's hard to argue with the amount of kit the car gets as standard. There's a full leather interior, Porsche Active Suspension Management (PASM), Bi-Xenon headlights, front and rear ParkAssist, tyre pressure monitoring, 19-inch alloy wheels, automatic dimming rear view mirrors, Porsche Communication Management with touch-screen satellite navigation and audio controls, cruise control and a three year warranty. That's on top of adaptive air suspension and a Porsche Vehicle Tracking System (VTS). Most buyers add the optional 'Sport Chrono' package. This gives you Launch Control' for F1-style get-aways, a dash-top stopwatch and a steering wheel-mounted mode switch for the various driving settings, in the centre of which is a 'Sport Response' button that gives you a short term blast of engine response that'll be useful in tight overtaking manoeuvres.

Those who choose this particular Panamera variant will tell you that there's nothing else quite like it. That's not quite true - but it's easy to understand these people's perspective. The Sport Turismo looks unique - and is unique from a Porsche perspective. There must be lots of wealthy family buyers who've always wanted a Porsche but need five seats and don't want an SUV. This is their car. Issues, such as they are, manly relate to those we could level at the standard hatch version. The high price (of course), the relative mean levels of equipment for the money and the car's significant weight. Otherwise, there's much to like. If this is a car you can justify, we envy you.