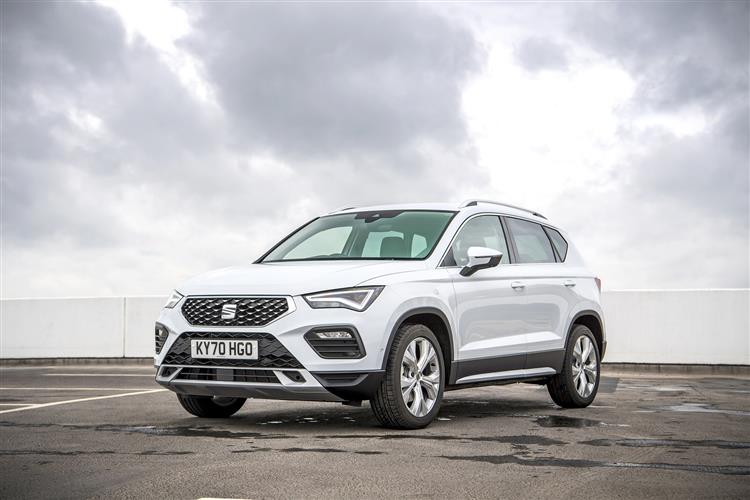 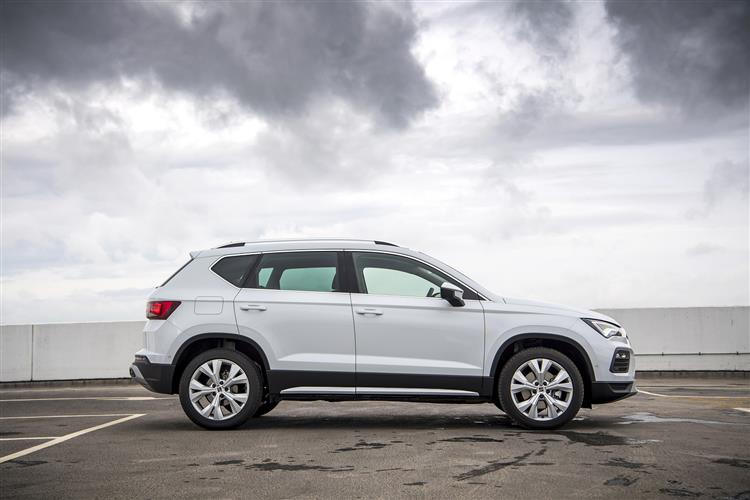 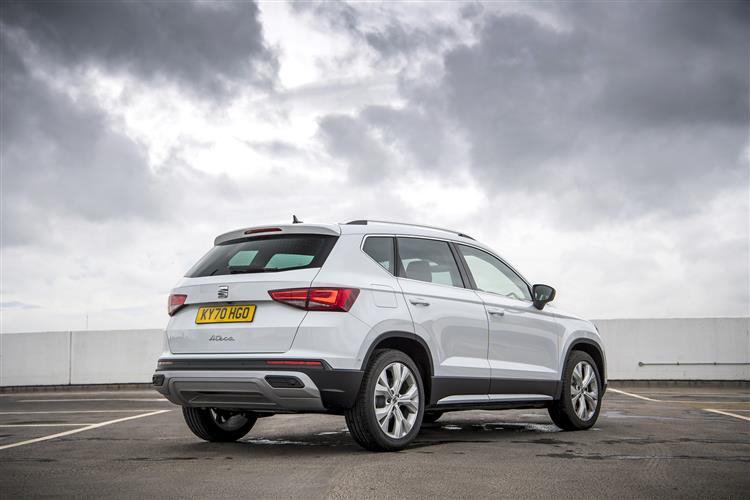 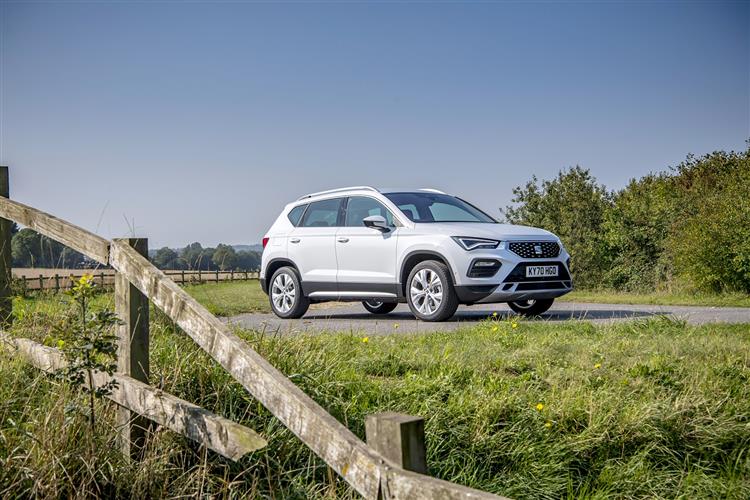 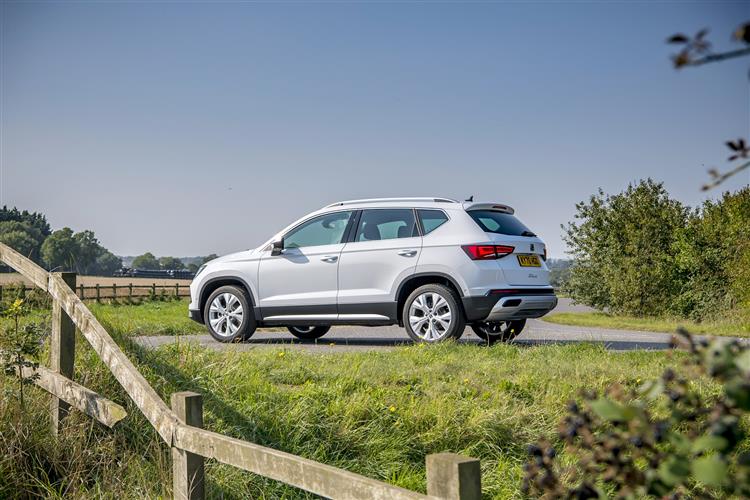 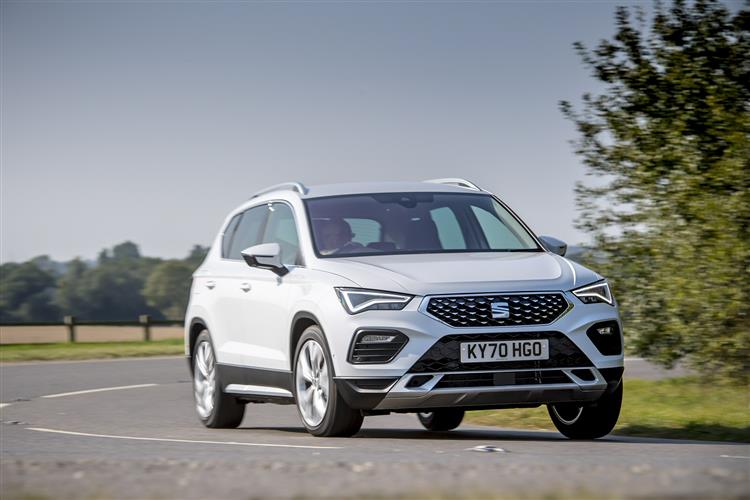 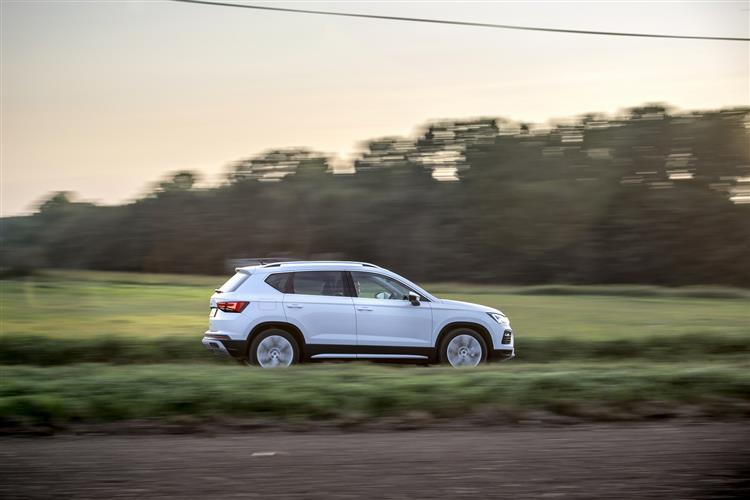 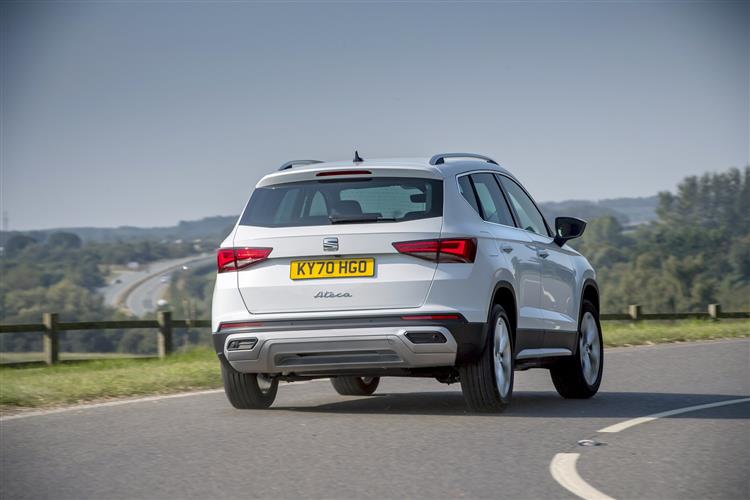 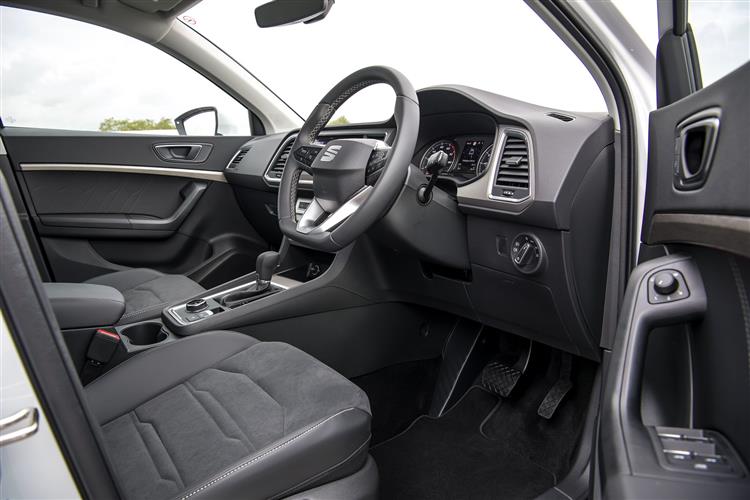 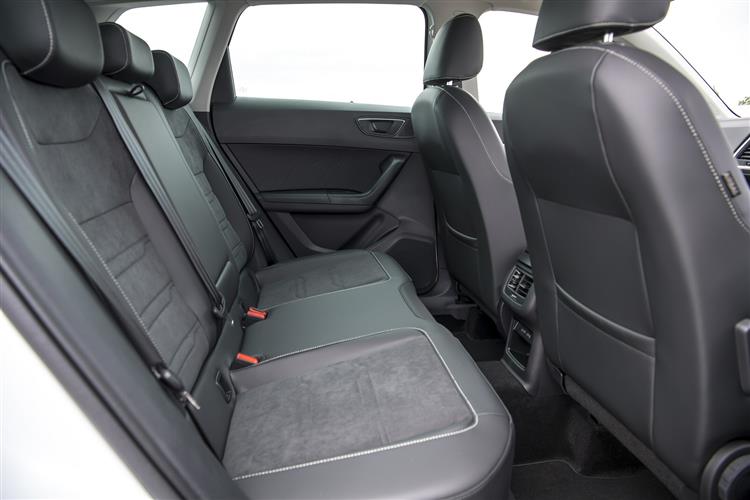 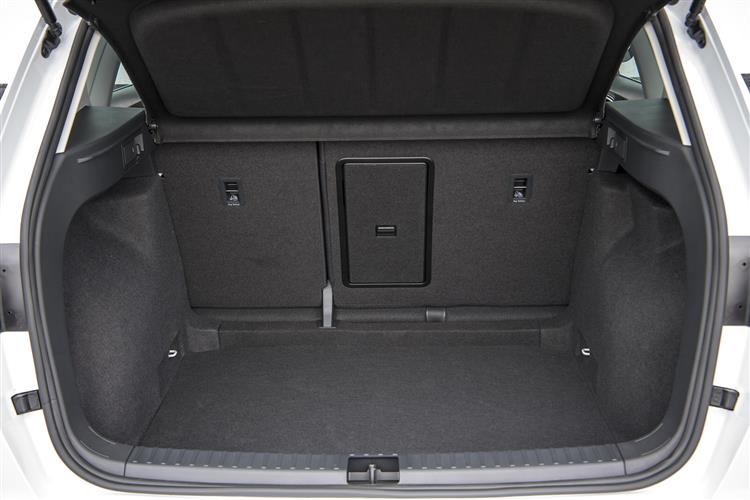 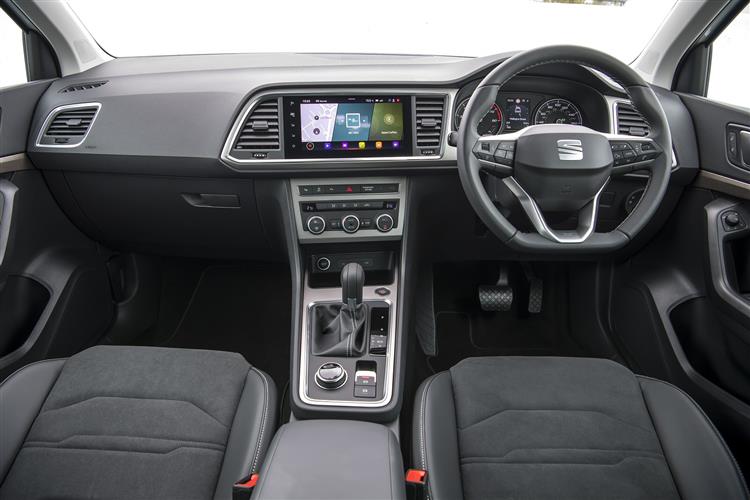 The Ateca was SEAT's very first Crossover. This updated version continues to look a strong proposition. Jonathan Crouch checks out what's on offer.

Not many brands enter an entirely new market segment and get it right first time, but that's exactly what Spanish maker SEAT managed with its first compact SUV, the Ateca. Launched in 2016, it's since become one of the Iberian manufacturer's biggest selling models, over 300,000 having been sold prior to the launch of this facelifted version. Nothing too extreme's been done here. Nothing much needed to be. The Ateca was already the best car in its segment to drive and also one of the most affordable and one of the more efficient. But its looks were becoming over-familiar, so SEAT's tweaked those, at the same time as adding the latest screen tech to the cabin, plus there's been some mild tinkering in the engine range.

Prior to the original launch of this Ateca, we'd come to accept that compact Crossover models of this kind were never going to be very good to drive. If that's still your perspective, then a pleasant surprise is in store once you hit a few twisty roads in this little SUV. Drive at seven or eight tenths and there's pretty much no difference between the dynamic responses you get from this SEAT and those of the Leon hatchback it's based upon. Only when you push right to the limit does this Ateca's taller stance and slight extra weight begin to tell - and even then, the car's pretty responsive, with well-controlled body roll and enthusiastic levels of grip and traction. That much has remained the same with this revised version, but there are a few changes on the engine front. The turbocharged 1.0-litre three cylinder TSI petrol unit that most customers choose is now standardised with 110PS and gets a range of updates to improve its efficiency. It's only available linked to manual transmission. If you want the option of an auto with a petrol-powered Ateca, you'll probably want the 1.5 TSI unit, which puts out 150PS and is also now slightly more efficient, as before integrating Active Cylinder Management technology. The most powerful petrol option is a 190PS 2.0-litre TSI unit which can only be had linked to DSG dual-clutch auto transmission and an extra-cost 4Drive all-wheel-drive system. The 2.0 TSI unit is also available in the top CUPRA Ateca with a 300PS power output. As for diesel, well the previous 1.6 TDI unit is no more, replaced by a 115PS 2.0-litre TDI powerplant offered only in manual form. There's also a 2.0-litre TDI 150PS diesel unit, which can be had with the option of DSG dual-clutch auto transmission and 4Drive AWD.

You'd recognise this as a slightly newer model thanks to its revised radiator grille, its smarter LED headlamps and its redesigned fog lamps. Further design changes have been made to the front air intakes, the skid plate and the bumper. The designers have also added the same creases into the bonnet as you'll find on the latest Leon hatch and the large Tarraco SUV, establishing a family connection between these key models. There are also new exhaust pipes and on the tailgate, the Ateca gets the handwriting-style logo badge we first saw on the latest Leon. Under skin, this SEAT continues to sit on the same MQB platform as its more conventional Leon stablemate and uses most of the same mechanicals found in similarly-sized Volkswagen Group SUVs. Inside, there are fresh designs for the door cards and smarter trim materials, plus there's much nicer re-upholstered steering wheel. Plusher models now get the 10.25-inch SEAT Digital Cockpit instrument binnacle screen. Plus across the range, an upgraded infotainment system, which incorporates a new HMI interface, is available via repositioned 8.25-inch or 9.2-inch touchscreens, ensuring that the interior is fully digitalised. At the back, there's decent room for two adults on supportive seats, but the bench doesn't slide nor do the back rests recline like they do in a Volkswagen Tiguan. The 485-litre boot's a bit smaller than that pricier Volkswagen rival model too, though will easily swallow a couple of big cases and a pushchair.

There's a choice of 'SE', 'SE Dynamic', 'FR', 'FR Sport', 'Xperience', 'Xperience Lux' and 'CUPRA' trim levels. The asking figures start from just over £24,500 and you're going to be paying around £28,000 for one of the sporty 'FR' variants many potential buyers will want. The 'Xperience' variant gets off road styling additions including black plastic lower trim, an aluminium finish valance and side mouldings and body-coloured surrounds for the wheel arches. The mid-range 'FR' trim level is defined by a sportier visual with key accents, including a fresh grille design, special front and rear bumper mouldings, a fog lamp grill, mirror caps, unique side mouldings and bespoke exhausts, all finished in Cosmo Grey Matte. The standard infotainment system boasts an 8.25-inch screen with smartphone audio compatibility, while the larger 9.2-inch Connect System (standard from 'SE Dynamic' trim upwards) offers online navigation and natural voice control to simplify user interaction. There's a redesigned voice recognition system too: to wake it up, you say "Hola Hola" and it will be ready to go. Plus as before, there's SEAT's 'Full Link' media system, allowing owners to seamlessly pair their smartphones and access their digital lives no matter what device they use - either wireless Apple CarPlay (based on Bluetooth or WLAN) or Android Auto using a cable.

A little surprisingly, there's no trace of engine electrification here - for the time being anyway. The key news with this revised model is that the 1.0-litre TSI three cylinder petrol engine that most Ateca customers choose now features a new combustion process and a variable geometry turbocharger, which together improve efficiency by claimed 10%. The alternative entry-level diesel, a 115PS 2.0-litre TDI unit, has also been enhanced over the previous 1.6 litre TDI powerplant, now featuring a twin-dosing SCR system that cuts and NOx emissions significantly. The 2.0 TDI 150PS unit continues, managing up to 52.3mpg on the combined cycle and up to 141g/km in manual form. On to maintenance. Every Ateca has the same servicing requirements. A major service is required at 2,000 mile intervals, with an oil change every 10,000 miles. Cars that travel less than 10,000 miles a year require an inspection service with an oil change every 12 months. What else? Well there's SEAT's usual three year/60,000 mile warranty. That's unexceptional when rivals like Toyota and Hyundai offer five years of cover as standard and Kia offers up to seven years. However, the SEAT deal is extendable, so you might be able to negotiate on that. And it includes two years of Europe-wide roadside assistance.

If you didn't already want an Ateca, there's nothing here that would radically reposition this car in your thinking. But if you were approaching the purchase of one of the smaller volume brand mid-sized SUVs with an open mind and tried the improved version of this SEAT, we think you'd like what you found. This Ateca now feels like an up-to-the-minute crossover, rather than one launched half a decade ago. That's the object of any facelift but not all of them achieve this goal. The engine changes are probably most significant, with greater economy and lower emissions for the base petrol and diesel units that most Ateca buyers will want. But we think this car's biggest selling point will continue to be something that hasn't been affected one jot by this update. Driving dynamics. This is still that rarest of things, a small SUV that is great to drive. Long may it continue.